You can edit your menu content on the Menus screen in the Appearance section.

On July 21, 1976, the American Legion Association opened its annual three-day convention at the Bellevue Stratford Hotel in Philadelphia in the United States of America. More than 2,000 Legionnaires, mostly men, attended the convention. The date and city were chosen to coincide with America’s celebration of the 200th anniversary of the signing of the US declaration of independence at Philadelphia in 1776.

On July 27, three days after the convention ended, Legionnaire Ray Brennan, a 61-year-old retired US air force captain and an American Legion bookkeeper, died at his home of an apparent heart attack. Brennan had returned home from the convention on the evening of July 24 complaining of feeling tired. On July 30, another Legionnaire, Frank Aveni, aged 60, also died of an apparent heart attack, as did three other Legionnaires. All of them had been convention attendees. Twenty-four hours later, on August 1, six more Legionnaires died. They ranged in age from 39 to 82, and, like Ray Brennan, Frank Aveni, and the three other Legionnaires, all had complained of tiredness, chest pains, lung congestion, and fever.

Three of the Legionnaires had been patients of Ernest Campbell, a physician in Bloomsberg, Philadelphia, who noticed that all three men had been at the Legionnaires convention in Philadelphia. He contacted the Pennsylvania Department of Health. Officials at the American Legion also began getting notices of the sudden deaths of several members, all at the same time. Within a week, more than 130 people, mostly men, had been hospitalized, and 25 had died.

Both the first week and later, there were 149 Legionnaires who became sick and 33 other persons associated with the hotel or in the area who also became sick. Of these total of 182 cases, 29 persons died. 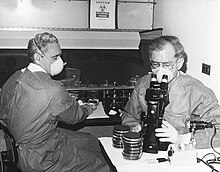 The U.S. centre for disease control mounted an unprecedented investigation and, by September, the focus had shifted from outside causes, such as a disease carrier, to the hotel environment itself. In January 1977, the Legionella bacterium was finally identified and isolated and was found to be breeding in the cooling tower of the hotel’s cooling tower located on the roof, which then spread it through the building. This finding prompted new regulations worldwide for open evaporative cooling systems.

While the centre for disease control responded rapidly, as did the Pennsylvania Health Department, it took six months for the CDC microbiologist Joseph McDade to discover the cause of the outbreak. He initially thought the cause was viral because blood and tissues from the victims failed to grow bacteria when incubated in culture medium. His subsequent attempts to isolate the viral agent in eggs included antibiotics to kill off “contaminating” bacteria. It was only when he omitted the antibiotics that the bacteria grew in eggs. Attempts to reproduce the disease in mice, the standard laboratory animal model, also failed. The disease was finally produced in guinea pigs. The CDC announced the discovery at a press conference on January 18, 1977.  The bacterium was later named Legionella pneumophila.